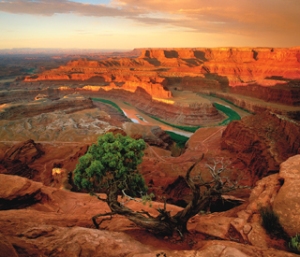 So, I had a work gig a few days ago in the uber-rural town of Price, Utah, the political seat and largest town in Carbon County.  I left my hotel in Provo, home of Brigham Young University, at 7:30am actually looking forward to 90 minutes of digital downtime. I’d been warned the Highway 6 route through tall-walled Spanish Fork Canyon plays havoc with reliable cell signals, and I was hoping for a quiet respite from my usual endless drone of phone calls and emails.

Before I knew it four paved lanes had narrowed to two, shoulders steepened, side-roads disappeared, and recently-patched asphalt began a serpentine wander through a desolate, rocky landscape straight out of some John Wayne oater.  Stratified layers of limestone and shale towered above me on either side, their near vertical cliffs streaked with rosy pink sandstone.  The occasional glitter of pyrite and mica flecks sparkled when the morning sunlight caught it just so.  And then suddenly the steep walls dropped away and revealed an astonishing vista of ancient mesas more numerous than I could ever imagine.

So, here’s the deal.  I travel a ton, and all around the West.  Schools are everywhere, and if they need support from my company, then to hither and yon I go.  Because of that I’ve seen spectacular, often indescribable, tableaus and vistas, But this was unlike anything I’d seen before and I actually pulled over to the edge of the road to get an un-windshield-obstructed look.  A chance to comprehend it. And to take a tally.

Standing in one place and spanning my eyes from the northwest horizon across 150 degrees or so to the southeast, I identified 22 distinct and separate mesas, each of them as perfectly flat-topped as the next.  As though God Himself had scythed His hand across the valley and lopped the top off every mountain He could find.  Now, I’ve seen the Grand Canyon a few different times, as well as Zion and Bryce National Parks, and been awed by their profoundly unique geology, but this Land of the Mesas moved me nearly as much.  I tried wrapping my brain around the science of it. And the beauty of it.

A decade or so ago I began reading the Dave Robicheaux novels by stellar wordsmith James Lee Burke and numerous times in each book I’d find myself pausing to reread certain words, sentences, or even paragraphs simply to relish Burke’s mastery of descriptive place.  Of setting.  It’s like he’s painting a landscape, only his palette is loaded with every perfect word in the English language from which he can pick and choose and blend and distinctly craft some of the most poetic descriptions I’ve found in contemporary literature.

When I pick up a book and turn my eyes to that first page, my goal — my hope — is to lose myself in another place and time.  To escape temporarily from the real and become for a moment someone else, somewhere else.  And my journey through Spanish Fork Canyon reminded me of that.

It’s not by accident that my first suspense thriller is set in Seattle, my home of 40 years.  Local readers of Brother’s Keeper compliment my insightful use of setting to advance and shift and shape the story.  And out-of-town readers — even those who’ve never experienced the Emerald City — admit being transported there through my words.  I couldn’t ask for a kinder kudo.

No matter which side of the page you’re on, writer or reader — or both — take the time to pull over to the side of the road.  Stop and smell the roses. Soak in the setting.  You’ll be better for it.