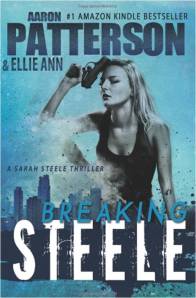 So, a friend I’ve never met writes a blog that consistently busts my gut and amuses me to no end, and when I learned she’d collaborated with a popular thriller writer on a new pulp crime series featuring a reluctant Assistant D. A. heroine named Sarah Steele, I simply had to bite and Amazoned it in paperback, then read it on a return flight from Chicago just before Christmas.  Took me four hours to power through it.  Couldn’t put it down.  Buckle your seat belts for take off — READ — Buckle your seat belts for landing.  Done.  Wow.  What just happened?

Oh, Ellie Ann, this girl can write!  I have no way of knowing which parts and pieces of Breaking Steele were her contribution and which poured from the pen of collaborator Aaron Patterson, but I heard her voice woven throughout the narrative.  She’s a funny gal and there’s a subtle wry humor that springs up on occasion that’s clearly hers. Bottom line, though, it doesn’t really matter.  Ellie and Aaron, Aaron and Ellie — it just flat out works.

But I’ve got to warn you, this is pulp crime.  As in pulp fiction.  As in raw and wicked and in your face and without a lot of poetry.  James Lee Burke they ain’t.  Characters die big and wrong and bloody and at times your stomach will turn and your skin might crawl.  But in oh such a please-no-but-give-me-more kind of way.  And you’re in the midst of it from paragraph one.  Innocent young woman kidnapped, bound with duct tape in a crate reeking of rotten corn, rat droppings, and urine, then abused offstage in
every manner possible and electrocuted in a bathtub.  But there’s a witness and an arrest and tons of evidence and an open-and-shut case.  ADA Sarah Steele is riding high and sensibly confident in conviction and justice served.  Then everything goes to hell.

And for Sarah Steele, it becomes personal.  Especially when the profession she’s committed her life and soul to is compromised and she begins to question if justice truly can be served without crossing into that dark place where vigilantes accomplish what the legal system can’t.  The co-authors do such a fine job delving into her struggle, but without slowing the story’s breakneck pace, and by five chapters in you’ll be totally hooked on both the story AND on Sarah Steele. (Who’s also a bit of a hottie, IMHO.  Which never really hurts.)

Back in the day, pulp crime writers would pump out these bare bones magazine serials with fresh chapters on newsstands each week; short and sweet episodes with enough visceral grab to keep your attention until next Tuesday. 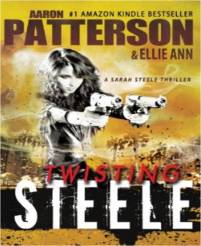 Pack a few dozen of those together, slap a cover on, and you’d have a pulp novel.  Then it’d start all over again with the next one.  Consider some of the film work of Quentin Tarantino or Robert Rodriquez and you’ll know exactly what I’m talking about: they do pulp crime on the big screen.

I love this stuff.  And Breaking Steele does the genres justice: pulp, crime, thriller, page-turner, recommended read.  I know I have to wait until March (and not next Tuesday), but I’m squirming in my seat for Twisting Steele, the next Sarah Steele Thriller.