So, the all-too-quick weekend in Istanbul is finito and it’s time to head south to see my dad and his wife, Angela, and in a couple of days my younger brother Eric, his wife Jerri, and his post-college-aged daughter Nicole.

I mentioned the background to all this a number of posts ago, but again the quick summary:  My parents bought a small hotel in the Caribbean in 1973, then they divorced and both remarried outstandingly cool people, my dad’s wife being Angela, and they sold the hotel in ’86 and my dad bought a place in north central England (Lincolnshire) and they started splitting their time between the Turks & Caicos and England, but then they began vacationing with a sorta timeshare deal and hit on this place in southwest Turkey that they fell in love with and a few years later decided to buy a small place and refurb it, and so now they tri-split their time between the three spots, and this year is my dad’s 80th birthday, so he invited us to join him there to celebrate.  Phew!  Now his birthdays’ not until this Tuesday the 17th, but schedules are what they are, so late June it was.

END_OF_DOCUMENT_TOKEN_TO_BE_REPLACED 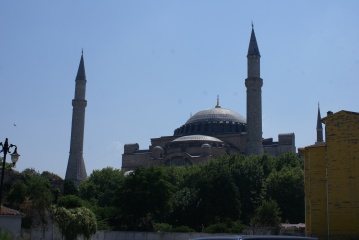 So, our last full day in Istanbul.  Yesterday was shopping and touring; today we’d hit the two biggest and most recognized mosques in the city and also the impressively preserved Topkapi Palace, former residence of the Ottoman Sultans.

But before I start, two lessons learned on this first major world voyage whilst maintaining my blog:

A.  As much as I love my iPad, it’s a pain in the arse for blogging while traveling.  I can write on it no problem, but working on the WordPress site is a major hassle: the text entry window is tiny and inserting then sizing images is cumbersome and nearly impossible.

B.  Plus, I’m taking my high quality photos with my digital SLR Sony camera.  To transfer those images requires a USB port, which the iPad doesn’t have, so I ended up downloading those to Nancy’s laptop anyway, which meant my typical blog-posting process sequenced as follows:

Compared to my usual process . . . this was 4-5 times more time-consuming.

Next time I’ll bring my own laptop and I’ll know better how to tap into the Net outside of the U.S.

Okay, back to Istanbul.

END_OF_DOCUMENT_TOKEN_TO_BE_REPLACED

So, with a mere two days to experience all Istanbul has to offer I checked in with Gem, our expertly knowledgable concierge at the W Hotel, and he suggested a few must-dos for this magnificent and multi-faceted city.  That meant Saturday tackling the bazaars and a cruise of the Bosphorus.

1.  Still a bit jet-lagged and recovering from our night in Taksim Square, we slept in until 9am, skipped breakfast, then fetched some Turkish lira from a bank machine in the Migros convenience store a couple of blocks away.  They didn’t open until 10, so we wandered  through the tight-packed tangle of streets admiring the entrepreneurial creativity of the shopkeepers who had wedged their tiny businesses into spaces barely half the size of our hotel room.  And each with a small stool or chair outside propped outside, the better for gabbing with the vendor next door.  Cozy. 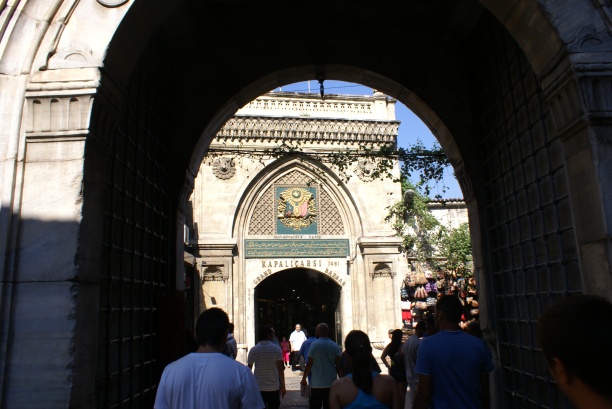 2.  After downloading our moolah we taksied to the Grand Bazaar, by reputation perhaps the single largest flea market in the world.

END_OF_DOCUMENT_TOKEN_TO_BE_REPLACED

So, we’re two full days into Istanbul and I’m wishing we weren’t jetting south tomorrow to see my dad and the southwest Turkish coast. This is a spectacular city, and for a whole lot of reasons, many of which I’ll detail below and in my next couple of posts.  Since it’s taken me longer than I’d hoped to get online and scribe, I’m going to split my Istanbul highlights into three back-to-back posts, one for each day here.  That way you won’t be faced with endless scrolling, involuntary yawning, and that secret wish to jump ahead simply because it’s so dang long!

1. Here’s some sage advice from a guy who knows it firsthand: fly on a single airline your entire life, use their credit card, and take advantage of every partnered perk they have that earns you points/miles.  Believe me, it all adds up.  In the 20 years that I’ve been flying tons I’ve earned almost 900,000 actual air miles with my home-based Alaska Airlines. Add to that bonus miles, credit card miles, rental car miles, 1-800-FLOWERS miles, etc., etc. and it’s probably 3-4 million. And I’ve been able to leverage that into  a bunch of free flights for myself and extended family.

END_OF_DOCUMENT_TOKEN_TO_BE_REPLACED

So, my wife and I kick off the vacation of our lives this morning, winging our way first to Chicago, then on to Paris for a quick layover before our final leg to Istanbul, Turkey.  Yeah, pretty amazing, huh?  Little ol’ me in Turkey.  And we’re not stopping there.

You see, it’s like this in a nutshell: My parents bought a small hotel in the Caribbean in 1973, then they divorced and both remarried outstandingly cool people, my dad’s wife Angela being Welsh, and they sold the hotel and my dad bought a place in north central England (Lincolnshire) and they started splitting their time between the Turks & Caicos and England, but then they began vacationing with a sorta timeshare deal and hit on this place in southwest Turkey that they fell in love with and a few years later decided to buy a small place and refurb it, and so now they tri-split their time between the three spots, and this year is my dad’s 80th birthday, so he invited us to join him there to celebrate.  Got it? 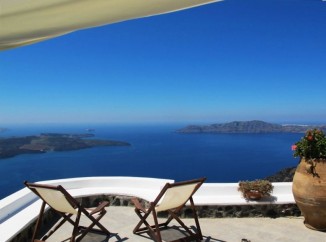 But first Nancy and I will hang out in Istanbul for a few days, then fly down to Dalamar where we’ll drive around to Amos, where my dad lives, which is right next to Turunç.  We’ll get there on Monday and then my brother Eric and his wife and daughter will arrive on Wednesday from Bangalore, India, where he works for Boeing.  On Friday we’ll leave them and ferry to Rodos, where we’ll catch a plane to Athens, then on to the Greek isle of Santorini for a week of unfathomable bliss.  We decided to take our first shot at VRBO — Vacation Rental By Owner — and I think we scored big time.  Here’s a photo of our balcony.  Seriously, that’s our exact balcony.  The place is called Mi Amo, you can look it up.  We’ll then finish the trip with one night in Paris, France — we arrive at 2:30pm and depart for home at 10:30am the next day.  A single night in Paris.  Sounds like a movie or something.

See, like I said, a trip of a lifetime.  At least my life time so far.  And if you’d like to tag along on the journey, I’m going to do my best to post something every couple of days.  Some photos and anecdotes.  Should be fun.  Though I’m not bringing my laptop, just my iPad, and WordPress doesn’t work so well on that little unit.  I may need to steal away to an Internet cafe here or there to do my thing.  We’ll see how it goes.

Oh, and if you want to take a look, I just launched a new website which will be the hub for all my work as a writer/author.  It’s pretty simple: www.authorglenngordon.com  Still not exactly what I want, but it’s getting there.